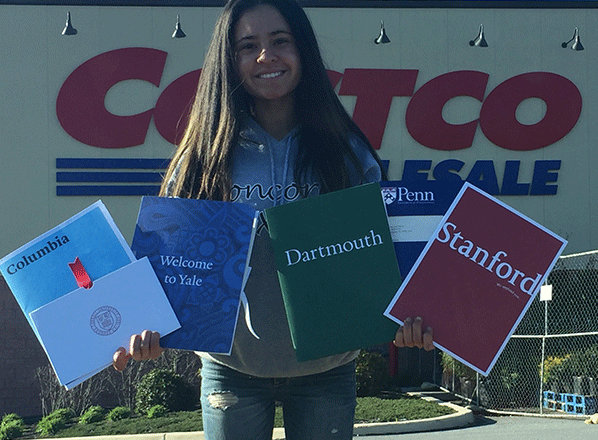 As she shared her Common Admissions essay with a news media on the internet, the former quickly went viral. It was clear that what stood out was her ability to build unique humor and reflect self-identity into and through the stylistic architectonics of the less than a thousand words paper. She confessed about her difficulty to express her experiences and qualifications within a thousand words, but mentioned about her knowledge about the singular importance of the essay as being able to communicate the writer’s identity without having named that particular person.

She had narrowed the identifiable qualities to convey to the admissions officers to one or two and added that she used a ludic tone to write down those qualities. Her defining sense of humor was clear in the way she mentioned about a trip to Costco. There, smoking a hickory ham inspired a conversation between her father and herself about the contentious nature of President Andrew Jackson also known as ‘Old Hickory.’

While it was this humorous approach that made her essay stand out among thousands of candidates at Yale and the rest of the schools, it was not only the essay that made her application successful. What made her admission application successful at five of the Ivies, Stanford and other universities such as Johns Hopkins, Northwestern, New York and Boston, were her fluency in Brazilian-Portuguese and Spanish and being a valedictorian of her Concord High School class where she stood first each year with a weighted GPA at 4.9 and an un-weighted at 4.0. In addition, she also took eight Advanced Placement courses, mostly in science, throughout her classes at her high school. Besides, she also presented her research at the end of the conference at the Massachusetts Institute of Technology (MIT) program in Science, Technology Engineering, and Math (STEM) where her options were on astrophysics and science writing.

Apart from extra-curricular and SAT scores, which many students have, there was her love for Costco where she took her vacations, looking upon the place like a Disneyland. The essay reflected that and on a fragmentary and rich montage of her life, academically serious and sometimes silly and light-hearted, making her application stand out among thousands. Not taking the traditional route with the anxiety of conforming, Stinson explored the disciplines of history, biology and dance along with calculus, cross-country running and research in science. This cart full of theoretical notions, as much from her studies as her life made it superbly self-referential and uniquely identifiable with the chock-a-block of her life. It also earned her the deserving place at five of the much-coveted Ivies, Stanford and the other top colleges.

MyAssignmenthelp.com assists students in writing the perfect application essay that stands out from the rest

The people at MyAssignmenthelp.com are some of the best in their disciplinary fields. Many have spent years on the undergraduate and graduate application boards of recognized universities. They are well aware of what makes the personal essay stand out, not conform and blend with the rest. Once they have the updated CV and some of the unique life experiences of the students, they can create an essay that is self-identifiable with that particular student’s life. They have already drafted and delivered highly personalized and academically unique essays to many students who are now well placed at universities in USA, UK and Australia. Once the seasoned experts receive the customized requirements and details of the students, they will draft an application essay that is unique to each student. Their years of experience make them stand out as one of the best personal essay service providers in the academic market. Rates that are reasonable and tailor-made for less fortunate students are available to reflect the special achievements of the disadvantaged. Besides, we also serve the best students as per their requirements.